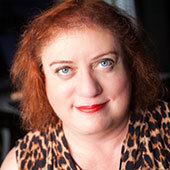 Marla has more than 20 years of experience doing award-winning design work for a variety of companies—from dotcom startups to Hollywood studios such as Disney to Fortune 500 companies, including Nestle, Transamerica, and The Capital Group, and to Internet giants such as Yahoo!, where she was the interaction designer for Yahoo! Search. Marla heads her own User Experience consultancy. She has also taught at UCLA Extension, spoken at numerous conferences, and written articles about UX design. Back when Marla had a hands-on role in crafting Web sites, she co-founded The Web Standards Project, a grassroots coalition of Web developers who sought to ensure browser-makers fully supported HTML, CSS, and other Web standards that help make the Web accessible to all. She was also a co-founder of both Boxes and Arrows, a peer-written online journal about UX issues, and UXnet, a group seeking to make connections between people, resources, and UX organizations.

Designing Breakthrough Products: Going Where No User Has Gone Before