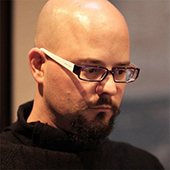 Roberto is one of those multi-faceted personalities who is interested in finding the synergies between various fields. Musician, photographer, programmer, and MBA—class of 1997—Roberto became an auditor for PricewaterhouseCoopers to learn about the deep accounting mechanisms that regulate companies. He then led the marketing team at the broadband ISP company chello Belgium, where he was responsible for the ideation and launch of advertising campaigns, market analysis, and product definition. As his interests moved toward the technical aspects of running an IT business, he became systems integrator for chello in France. Then in 2002, Roberto started his own software company, e-undertown, with the goal of providing integrated Internet systems for utility networks. Now at Kallideas, in Italy, Roberto is Director of the LAB Technologies Division, dealing with research, development, and the integration of the many technologies behind the creation of intelligent virtual assistants. He is exploring artificial intelligence, with particular attention on human-like emotional software models, building complex and scalable software architectures, and integrating existing state-of-the-art technologies such as semantic engines and voice software.

The Composite Intelligence of Virtual Assistants