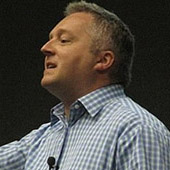 Gary was an educator, pioneer, and community builder and a passionate advocate of human-computer interaction (HCI) for development. He is known internationally for his work in mobile interface design and Information and Communications Technologies for Development (ICT4D)—for which he was a recipient of the ACM SIGCHI’s Social Impact Award in 2007. Gary died suddenly of a heart attack on December 27, 2013. He is survived by his wife Gil and his two children, Holly and Jake.

Check out the There’s Not An App For That blog.

There’s Not an App for That: Mobile User Experience Design for Life