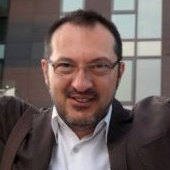 Leandro has more than 10 years of experience as an interaction designer and manager of IxD teams. He specializes in next generation user interfaces that provide human-like interaction with intelligent virtual assistants. At Key-One, in Milan, Italy, Leandro is providing detailed specifications for the behaviors of such virtual assistants, including gesture, language, and social skills; defining emotional models that let these assistants respond to the moods of users; and designing visual user interfaces and voice-recognition systems. Before joining Key-One, Leandro was Advanced Design Director at the innovative startup SrLabs, where he focused on eyetracking for the usability market. While there, he led a design team that created the first hands-free, multimodal GUI with voice and gaze input. Previously, he was co-founder and Vice President of a large eConsultancy with offices in Milan and Boston. Leandro studied interaction design at the Domus Academy, in Milan, Italy. He is actively involved with the Milano Bicocca University, TorVergata University, and others. Leandro is a prolific writer on topics from IxD, usability, and UX to natural, multimodal user interfaces. He was the founder of Idearium.org, the first Italian eZine/community for UX designers, and is co-producer of the Interaction Frontiers conference.

From GUI to E(motional) UI