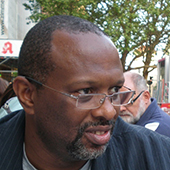 At Motorola, Kevin researches new user interface technologies and expresses them as connected user-centered experiences, using various media. Always interested in both computer science and filmmaking, he hungered for them to become more integrated. While researching how to use both to tell stories, he found the oral storytelling community in the Boston area. As Kevin developed and performed as a professional oral storyteller, then began coaching other storytellers, he learned a lot about storytelling as a pivotal part of the creative, performance, and design process. As a storyteller, Kevin tells humorous and poignant tales from his life for both adults and families, as you can hear on his CD Kiss of Summer. He has been a featured performer at storytelling festivals and conferences and has given numerous storytelling workshops to engineers, designers, and other storytellers. As an undergraduate, Kevin studied engineering, computer science, creative writing, and film production, receiving a BS in Communications from Drexel University. He earned an MA in Documentary Film from Stanford University. Kevin received his PhD in Media Arts and Sciences from the MIT Media Lab, where his area of research was computational narrative and interactive cinema. Kevin has published several papers on storytelling and interactive story design. He is the coauthor, with Whitney Quesenbery, of the Rosenfeld Media book Storytelling in User Experience Design.

Putting people at the center of design

A column by Whitney Quesenbery and Kevin Brooks