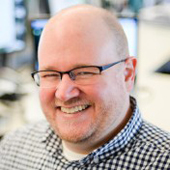 Jonathan follows his passions for interaction design and cognitive psychology to build connections between user research and user-centered design (UCD), especially research and design with a focus on children. At Ignite Seattle, he spoke about the inapplicability of UX principles to children. He continues to be active in this field of study. Prior to joining Blink in 2012, Jonathan worked on projects for diverse organizations, including Autodesk, Classmates.com, BP, CBS, the FBI, Sony, University of Melbourne’s Trinity College, and the University of Virginia (UVA). While at UVA, he received a Master of Science in Systems and Information Engineering, focusing on Human Factors. His thesis explored the removal of errors in audio-book recordings for blind and dyslexic people, mostly children. He received his Bachelor of Arts in Psychology from Swarthmore College. When not at work, Jonathan goofs around with his wife, gets pounced on by his two daughters, and gets walked by his pup.

Discovering Efficiencies in the Processing of Government Forms

How to Balance Design Guidelines for Children