Conference Report: The Web and Beyond

The conference was a great success and engendered much excitement and enthusiasm among its 625 attendees.

In the beautiful surroundings of the Pathé Tuschinski Theatre in Amsterdam, the Dutch chapter of SIGCHI—SIGCHI.nl, now rebranded as CHINederland.nl—on June 8th, 2006, held its 10th annual conference,

which was entitled The Web and Beyond, as shown in Figure 1. The conference focused on the challenges and opportunities Web 2.0 presents to the field of user experience design.

The conference was a great success and engendered much excitement and enthusiasm among its 625 attendees, representing the business, marketing, Web design, and HCI communities—most from The Netherlands. After several years of economic decline and many company reorganizations in The Netherlands, people thought the event marked a kind of turning point for the UX community.

Although the audience at this conference mostly comprised locals, two of the three keynote speakers were from the United States: Jesse James Garrett, of Adaptive Path, and Jared Spool, of User Interface Engineering. The third keynote speaker, Steven Pemberton, though originally from England, now lives and works in Amsterdam. Another American, Bill Scott, of Yahoo!®, presented the Yahoo! Design Pattern Library. Jeroen van Erp, of Fabrique.nl, chaired the conference.

Between the keynote addresses, there were several parallel sessions. Most sessions were in Dutch and addressed the conference theme of Web 2.0 within the Dutch context. Speakers addressed themes like technology, users, business/marketing, design, and society.

In his characteristically humorous and entertaining way, Jared Spool spoke about the usability challenges of Web 2.0 applications.

According to Jared, shown in Figure 2, many RIAs (Rich Internet Applications) suffer greatly from usability issues, but “we do not know how to design for this!” he said. For example, lots of people still have a hard time understanding the concept and usage of RSS feeds. And what about the usability of APIs? Ultimately, the user experience determines the success of Web 2.0 applications, not the technologies themselves.

Experience design has now become a boardroom conversation, but is the community ready to deliver? Jared posed this rhetorical question regarding whether the design community is ready to participate at the C-level management table.

Jared talked about the success of the iPod®—which results from its compelling user experience and integration with iTunes® and the iTunes Music/Movie Store—versus the lack of success for the feature-rich SanDisk®. Competitors of the iPod need to match its user experience. In the same way, Blockbuster™ needs to match the user experience of NetFlix™, where people talk about movies, not about its great Web 2.0 features.

Tags can have multiple meanings and are often very idiosyncratic.”—Jared Spool

The most successful Web 2.0 companies such as Flickr™ and YouTube™ are now completely about user experience. With features like RSS feeds, APIs, and folksonomies, Web 2.0 companies can deliver compelling user experiences. Most Web 2.0 applications have fewer features than earlier Web applications, but the features they have are very powerful. For example, Flickr started as a chat room for games, but morphed into a photo-sharing site. Jared was critical of the usability of folksonomies. Tags can have multiple meanings and are often very idiosyncratic.

According to Jared, the problem with Web 2.0 today is that it is still very much the arena of programmers, whereas it should also be the arena of UX designers, because we’re designing for user experience, not for features or technology. Currently, not much attention is paid to the usability of user interfaces for Web 2.0 applications.

During the Q&A session, Jared discussed the future of personal tags. With some future controlling mechanisms, these “tag sets will morph into something more useful than they currently are,” said Spool.

Show the context, do not tell it!”—Jesse James Garrett

Jesse spoke about trends in user research at Adaptive Path. The limits of conventional usability testing in the lab have become apparent. An important trend is the increasing awareness of the value of field research and ethnography. Adaptive Path does three kinds of user research. They do research in usability testing labs, conduct phone interviews, as shown in Figure 3, and go into the field to observe and interview users in their natural habitats at work, at home, or at play. Jesse showed us how Adaptive Path researchers take pictures in the field, then make a kind of documentary of product usage. His advice is, “Show the context, do not tell it!”

Tagging is tantamount to outsourcing the information architecture to users.”—Jesse James Garrett

Interaction design activities now relate directly to Ajax. Within the Ajax paradigm, it is no longer necessary to wait for page refreshes. A new application model has emerged, having as its basis technologies like XHTML/CSS and the Document Object Model (DOM). Two applications from Google™—Gmail and Maps—have put Ajax on the map. Two kinds of revolutions are taking place:

During the Q&A session, Jesse addressed the issue of search-engine findability in Ajax implementations. In general, we must see Ajax applications more as pragmatic solutions rather than perfect solutions.

Panel Discussion: The Next Generation of User Interface Patterns

It is an old idiom in a new space”—Bill Scott

Shown in Figure 4, Bill elaborated on the content of the design pattern libraries at Yahoo! and demonstrated a set of implementations. Although the current design patterns for Web 2.0 are nothing special—because their interaction models have long been present in graphic user interfaces for desktop applications—Bill concluded that the new context of the Web makes these patterns more significant. “It is an old idiom in a new space,” he said.

The Yahoo! Design Pattern Library has raised the awareness of patterns in the design community.

The Yahoo! Design Pattern Library has raised the awareness of patterns in the design community. The Library focuses on the language and grammar of design. Yahoo! shares its vocabulary of design, related code, and its approach to design thinking. The value of these patterns is educational as well and stimulates discussion among designers and developers Bill is also a proponent of open source design patterns and support for pattern reuse through APIs.

Martijn replied to critics who think design patterns stifle their creativity. According to him, “Patterns provide solutions for eighty percent of all design problems, freeing designers to spend their energy on the twenty percent of design problems that patterns do not address.”

Martijn outlined some of the challenges for the design pattern community, as follows:

What is remarkable is that Ajax came out of the user experience design community.”—Steven Pemberton

In an engaging presentation, Steven Pemberton stated that all the buzz about Web 2.0 is really nothing special. The term Web 2.0 just forges a connection between people’s thoughts and words. Its technological ingredients have been around for many years. We are building Web 2.0 applications on facilities that standards groups designed into the Web starting in 1995. What is remarkable is that Ajax came out of the user experience design community.

Shown in Figure 5, Steven stated that the Web community should take a more declarative approach to design. Implementation would then require less coding. With this approach, specifications are independent of user agents, require less code, and are easier to reuse. A Model-View-Controller (MVC) approach separates the general from the particular. The separation of structure from content also needs to happen. In the end, the browser will disappear. Although many ingredients of Web 2.0. are not really new, for user experience designers, its technologies are very challenging. The design of user experiences for Web 2.0 applications is just beginning to unfold.

The MVC is an old model for object-oriented software architecture, and with the separation between structure, content, and presentation, this model is revitalized in a new way.

Panel Discussion: The Web and Beyond

The reason people visit a site is for the user experience.”
—Jared Spool

Program chair Jeroen van Erp led the keynote speakers in the final panel discussion of the day. The panel, shown in Figure 6, consisted of Steven Pemberton, Jared Spool, and Justien Marseille, who stood in for Jesse James Garrett. Steven and Jared dominated most of the discussion.

Jared stated that the reason people visit a Web site is because it provides a good user experience—the characteristics of which include good, up-to-date content; high usability; and high performance. Sites exist because they offer content about some specific topic or let users achieve a specific purpose. They are not about presenting a great user interface. In the end, their user interfaces will become invisible. Designers must listen to users—to what they actually say—instead of trying to catch them with a sticky user interface. About the so-called Semantic Web Initiative, Jared stated that, as an historian, he wanted proof of its existence. Only when people can show him the Semantic Web will he have an opinion about it. According to Jared Spool, in general, 99.9% of everything is crap.

More About The Web and Beyond

Blog: BRAM.US, “My Web and Beyond”

Per Jesse James Garrett, is tagging really tantamount to outsourcing the IA? Isn’t it really just outsourcing one or more dimensions of the taxonomy? There still needs to be a designed IA for navigating the information space outside of the tags, for entering and managing the tags, as well as at least the framework of an IA—a set of rules for how tags are displayed and used to navigate.

If anything, there is more IA work to be done in implementing an experience that includes tagging than in one that does not!

Nice to see someone else posting a writeup on this lovely conference!

My colleague Jared also has written a nice writeup in Dutch, which can be read over at http://alfa7.be/2006/06/12/the-web-and-beyond/ 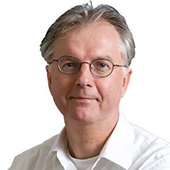 With almost 30 years of experience in information design, information architecture, and user-centered design, Peter is a recognized leader in the international information design community. Prior to founding BogieLand, he worked for the InfoDesign & Usability Group of Razorfish Europe and was information and user interface designer at Informaat. He was responsible for the design of intentional user experiences, including user interfaces, site architectures, navigation, and usability for clients such as eBay, Elsevier Science, IBM, Nissan, and Vodafone.  Read More