The Atmosphere at Frontiers of Interaction 2006

By Giovanni Bellocchio
No Comments

The recipe for this event was deceptively simple: Gather some fine thinkers in a room and let them speak about technology and people.

Leandro Agrò was the idea man, always carrying sophisticated bits of hardware in one of his pockets; never afraid to throw heterogeneous concepts at the audience. In a very postmodern fashion, Leandro’s speeches flow, making references to pop culture and effortlessly painting visions of the future. He managed to carry on the show even during the lunch break, with a dazzling discussion with Giorgio De Michelis that left bystanders’ heads spinning. I was satisfied to hear a Sim City reference.

Just like Lao-tzu said, “A journey of a thousand miles begins with a single step.” My relationship with Frontiers of Interaction began last year, in 2005, when Matteo and Leandro asked me to work on some of the graphics for the conference Web site. Now, Frontiers of Interaction 2006 has grown in scale and relevance, drawing bright individuals to the Università Bicocca. But when you’re trying to craft an experience, you can’t just assemble a bunch of specialists and simply jump into another technological hoop. You have to work with people, and you need a multidisciplinary approach with experts in both technology and user experience.

When you’re trying to craft an experience, … you need a multidisciplinary approach with experts in both technology and user experience.

Don’t forget the context in which Frontiers of Interaction occurred. Nowadays, Italy is hemorrhaging UX talent to the rest of Europe and overseas. Bicocca is one of the few organizations willing to take risks in order to spark creative conversations, providing invaluable support in terms of both structure and resources.

Other authors have provided more exhaustive reports about Frontiers of Interaction 2006. What I want to tell you about is the atmosphere at the conference.

As we entered the venue at Bicocca, subdued, bubbling dance music welcomed us, coming from a DJ setup near the stage. It was not your ordinary DJ setup, but a marvelous RANE system that bridges the gap between MP3 convenience and vinyl feel.

Later in the day, a Sony AIBO appeared. A crowd gathered instantly, and we couldn’t help but succumb to the overwhelming cuteness of a robot doggie. Each one of us thought in unison, “I want one of these.” And I really longed for the day when technology will shed its gears and icons and boxes, and we’ll be able to—stealing Fabio Sergio’s words—“caress the machine.”

But even while these cool technologies and their even cooler implementations were satisfying our inner geeks, the conversation remained steadily focused on people. Right at the start, Dirk Knemeyer’s introductory speech made it clear the focus would be on caring for people and emotion. It is difficult to find anyone more passionate about the future than Dirk, and he surely knows how to engage his audience.

This was, unfortunately, also the start of a long series of troubles with the video system. While this was a forgivable issue when live speakers were on the stage, it was show-stopping whenever Frontiers of Interaction 2006 was relying on video feeds—such as for Di Nocera’s enlightening speech. Overcoming these technological glitches, Flavio De Paoli, Matteo, and Leandro were always able to bring the show back on track.

The unifying theme was about people.

The unifying theme was about people, their reactions when confronting computing machinery and their ways of exploring, exploiting, and expanding their use of machines. Matteo’s Mobup is just one example of a tool that, by connecting dumb phones to highly connected computing devices, changes the Flickr user experience and bridges the gap between simple mobile phones and Negroponte’s $100 laptop.

Soon a counter-theme emerged: UX people investing efforts in defining user experience, what it does, and its relation to other disciplines. At the end of the day, I’m left with the impression that user experience is so fundamental and perpendicular to other fields that trying to define and constrain it is doomed to resemble an exercise in taxonomy.

Frontiers of Interaction 2006 was a great experience, with some margin for improvement.

Much of my enjoyment came from overhearing conversations at the bar and in the audience, watching people pick up the threads of great ideas and tie them together in new and creative ways.

Frontiers of Interaction 2006 was a great experience, with some margin for improvement. I’m sure next year’s Frontiers of Interaction will be even bigger and better and that Leandro, Matteo, and their collaborators are already working on it. I await Matteo’s pinging me on Skype to say, “Hi, I need the header graphics in another format.” 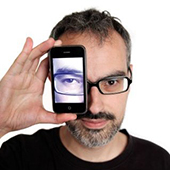 Giovanni has 10 years of experience, working as a freelance graphic artist, photographer, and Web designer in Milano, Italy.  Read More