By Riley Graham Longo
No Comments

I’ll describe the event from my perspective, and hopefully, talk you into attending next year!

From February 1st through February 4th, Dublin, Ireland, hosted about 800 interaction design fanatics from all around the world. Over four days at Interaction12, there were 15 workshops, 6 keynotes, and more than 80 presentations. In addition, many activities and events took place all over the city. During the conference, I met many wonderful people and attended many talks, but unfortunately, I cannot cover all of these presentations in this review. Check out the Interaction12

Web site for any other information you might be curious about. In this review, I’ll describe the event from my perspective, and hopefully, talk you into attending next year!

The conference was held in the beautiful Convention Center Dublin, known as The CCD.

A glass-enclosed atrium that extended the full height of the building overlooked the river Liffey, Dublin city center, and Wicklow mountains. Throughout all four days, in the time between the talks, musicians of all kinds filled the hallways of The CCD.

Disruptive thinking requires a disruptive hypothesis—which can be intentionally unreasonable—searching for a market opportunity, doing ideation, and finally, defining a solution.

After a full day of workshops on Wednesday, the main conference began on Thursday with the morning keynote speaker, Luke Williams, who set the tone for the conference with his talk on disruptive thinking in interaction design. Disruptive thinking requires a disruptive hypothesis—which can be intentionally unreasonable—searching for a market opportunity, doing ideation, and finally, defining a solution. Luke challenged attendees to consider how to incorporate disruptive thinking into interaction design. His ideas—which suggested shaking things up, challenging the status quo, and thinking outside the box—kicked off the conference and got the crowd buzzing.

Walking from the Exhibitions room to Liffey 2, I was greeted by beautiful gospel singing and, later, amazing Irish music. Once the musicians wrapped up their set, I made my way to Dave Malouf’s talk, “The Aesthetics of Motion in the Age of Natural User Interfaces.”

Dave opened his talk by bringing up two volunteers: one who was familiar with the game of charades and another to whom this game was a foreign concept. He asked the knowledgeable charades player to act out Toy Story for the volunteer who was unfamiliar with the game. After a few minutes of gestures and blank stares, he sent the volunteers back to their seats. Dave explained that gestures are contextual. If a person is unfamiliar with a concept, he will not be able to interpret the signs.

Gestures should also be learnable, make sense, and fit into a cultural context. Dave went on to explain the similarities between gestures, dance, and percussion. In dance, there are hard stops and fluid slides that distinguish different aspects of a piece of music. Similarly, gestures should communicate differences through form. Dave wrapped up his talk by presenting a five-step process for creating a successful gesture:

Framing the problem, designing, and exploring happen at the same time.

Friday morning began like every other morning, with a delicious breakfast and coffee at The CCD. Many conference-goers seemed to be dragging after the Thursday evening Pub Crawl that the interaction design firm Moment had sponsored. But everyone’s energy was quickly revived by Jonas Lowgren’s talk about exploring, sketching, and other designerly ways of working. Jonas explained that framing the problem, designing, and exploring happen at the same time. There are no routine steps that will lead you to a problem, so you must instead explore and sketch.

During the conference, I stumbled upon some amazing sketchers. One explained that sketching his notes helps him to put a talk in context and remember it better. After years of being yelled at in school for doodling, I was shocked to discover the validity of his claim. I’ve begun sketching myself, and while my skills are far from perfect, I find myself remembering moments that I’ve captured in sketches in my notes much more clearly.

A recurring theme surfaced in Ryan Betts’s talk, “Concept to Code: Code Literacy in UX.” Should a UX professional read and write code? During his 10-minute presentation, which was jam packed with 68 slides, he tactfully and amusingly expressed the importance of our learning to code. He defined code literacy as “the ability to identify, understand, interpret, create, communicate, and use rules that shape and reshape information, in order to participate fully in the creation of the new information.”

Code literacy may not be necessary for all UX designers, but it opens doors and helps UX professionals to create well-rounded, holistic experiences. During his talk, he defined four code-literate personas:

Winning projects ranged from applications to instrument panels, with 300 entries from 33 countries.

Friday evening, Google hosted the 2012 Interaction Awards celebration at the Mansion House. After a delicious Irish dinner and a glass of Guinness, we met up with some other conference-goers at one of the conference hotels and got directions to the Mansion House. We all agreed that a taxi would be the best means of transportation, so we hailed a cab and squeezed into the car. I quickly realized that I was sharing a cab with three newcomers attending the conference. We made our introductions just in time for the cab to drop us off at a beautiful stone building with a long red carpet leading to the entrance. In awe, we all questioned whether we were at the correct location until we stepped out of the car and saw a large IxD12 spotlight shining on the side of the mansion.

The Mansion House—built in 1821 for a visit of King George IV and later the site where the Irish Declaration of Independence was signed—was glowing with Interaction12 excitement. Free bottles of Guinness and Google green, red, yellow, and blue cupcakes covered the tables.

The hosts took the stage to present the awards. Winning projects ranged from applications to instrument panels, with 300 entries from 33 countries. Project LoopLoop, designed by Stimuland and Sifteo, won best in show. Interaction Cubes by Fudacado Oswaldo Cruz of Museu da Vida won the People’s Choice Award. The presenters gave out many other awards that evening. You can visit the 2012 Interaction Awards

site to learn about all of the projects and the brilliant-minded individuals who contributed to them.

Using heuristic principles, designers can establish whether a work is stable enough to support the weight of its use, be effective in execution, and stand on its own.

Saturday morning began with highlights from the Interaction Awards ceremony, which led into a talk by Abby Covert, “Does It Have Legs? Information Architecture Heuristics for Interaction Designers.” According to Abby, using heuristic principles, designers can establish whether a work is stable enough to support the weight of its use, be effective in execution, and stand on its own. She had defined an amazing table of ten heuristic principles for assessing designs, which she’d aggregated from UX professionals ranging from Lou Rosenfeld to Jakob Nielsen. These heuristics included the following: findable, accessible, clear, communicative, useful, credible, controllable, valuable, learnable, and delightful. In creating these heuristics, Abby reinvented the way we critique our work and also tipped her hat to the most notable UX professionals in the field.

Later in the day, Joshua Sin presented, “Ecosystems Versus Design / Business Ecosystems.” Joshua compared the amazing efficiency of nature with the processes that design and business require. Nature has survived 3.8 billion years of change and has learned to optimize rather than maximize, as well as to self-organize. If business and design processes were modeled after nature, they could enable us able to solve an inconceivable range of problems.

Adrian Westaway went on after the break and spoke about “Bananas, Technology, and Magic: Breaking the Clichés of User-Centered Design.” On Friday evening, Adrian and his team from Vitamins Design Ltd. had won the Interaction Award for best concept. He took the stage with what seemed to be ecstatic energy from the prior evening and began to talk about his love for magic. He explained that he had been a fan of magic for years. However, to me, it sounded like he was really a fan of the surprise and awe that magic creates.

He described a client’s request that they design a phone for older people. Adrian and his team had gone out to research the domain. They found plenty of phones that were designed for older people, which had large buttons and comically exaggerated keypads. Halfway through their research, Adrian had identified a recurring theme across the competition in this domain: all of these phones focused on the negative aspects of getting older. He decided part of their goal should be to create a product that was fun and highlighted the positive aspects of aging.

The team conducted focus groups to understand what these users would want in a phone. In the course of these focus groups, one user drew his phone diagram on a banana, and the results were fantastic. In subsequent focus groups and workshops, Adrian and his team asked users to diagram their perfect phone on a banana.

During one of the sessions, Adrian was talking to an elderly man who had drawn a map on his banana. Adrian asked him if it represented a GPS, and the man said, “Yes.” He noticed that the man had a phone at his side that was GPS enabled. Adrian asked the man, “Do you know your current phone has a GPS?” The man responded, “Yes, but I can’t find it.” This took the team in a new and exciting direction. They realized that the solution wasn’t designing a new phone, users had all the features they needed on their current phone. The solution was helping users to navigate to those features.

The result was “Out of the Box”—a gorgeous, step-by-step tutorial, containing the phone and wrapped in a bound book. This solution helps users of all kinds to navigate to the features on their phone.

The conference closed with the last keynote speaker, Genevieve Bell. She is an Australian-born anthropologist who directs the User Interaction and Experience group at Intel Labs. Her talk, “Rage Against the Machine? Designing Our Futures with Computing,” discussed our relationship with technology. Today, we live in a world in which we’re surrounded by technology, whether we’re in our workplaces or places in which we engage in leisure activities. She posed this question: Have we developed a new register in which we engage with these objects? The statement her closing slide made helped to wrap up the four days of stimulation and inspiration that the conference delivered: Has technology changed from interactions to relationships?

Saturday evening wrapped up with a social event at the Guinness Storehouse that Microsoft sponsored. We were free to roam the entire storehouse and make our way to the top-floor gravity bar for free Guinness. It was a bittersweet ending to an amazing experience.

I highly recommend that everyone take advantage of the opportunity to attend the conference next year. Interaction13 will be in Toronto, Canada. It marks the 10-year anniversary of IxDA, the 6th international Interaction conference, and overlaps with Design Week. Although I’ll never forget Interaction12, I’m eagerly awaiting Interaction13!

Covert, Abby. “Does It Have Legs? Information Architecture Heuristics for Interaction Designers.” 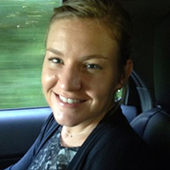 Riley has a passion for creating innovative, engaging user experiences. She is a firm believer that the best innovations stem from overlapping disciplines, thinking outside of the box, and adapting to change. Riley received her Masters of Science in Human-Computer Interaction from DePaul University and is local leader of the Chicago chapter of the Interaction Design Association.  Read More

Other Articles by Riley Graham