Last year’s rocky roll-out of healthcare.gov … got many people talking about why government agencies should join the rest of the technology industry in using agile development practices to improve the delivery of digital services.

A positive outcome from last year’s rocky roll-out of healthcare.gov is that it got many people talking about why US government agencies should join the rest of the technology industry in using agile development practices to improve the delivery of digital services. What if we took that notion a step further and considered how the government could use agile practices to fix some of the problems we have with gridlock in Congress?

Google defines a democracy as “a system of government by the whole population or all the eligible members of a state, typically through elected representatives.” [1] However, the current state of our democracy has more to do with what lobbyists want, what would get legislators re-elected, and what would persuade the few who are willing to cross party lines to vote for a particular piece of legislation. Did you know that only 9% of bills actually become laws? [2] And 42% of all Senate votes in the last year required a filibuster-proof two-thirds majority vote? [2] If we look at this problem from a designer’s perspective, we can start to find ways to improve the system.

Voters could both vote for their legislators and rank the high-level issues that they want them to pursue in the coming year.

Take a moment to imagine the following scenarios.

Giving Voters, Not Lobbyists, Influence over What Issues Congress Focuses On

On Election Day, voters would both vote for their legislators and rank the high-level issues that they want them to pursue in the coming year. These issues might be things like job creation, global warming, or affordable healthcare and would be written like an agile user story. By filling in the “so that I…” part of the user story, citizens could communicate to their elected officials why they’ve prioritized a given issue. On their ballot, voters could also submit issues to add to a ranked list of issues to vote on in the next election, as shown in Figure 1.

The issues would get added to a prioritized list of epics—the agile term for high-level, important topics, under which user stories are grouped—and assigned to congressional committees.

After the election, the issues would get added to a prioritized list of epics—the agile term for high-level, important topics, under which user stories are grouped—and assigned to congressional committees. Each committee would be allowed to introduce only bills relating to their purview, and any other legislation would fall to the bottom of the list.

Congress would work in two-week sprints—the term in agile development for a chunk of time within which a team must deliver working code. At the end of each sprint, each Congressional committee must have at least one piece of legislation ready for Congress to vote on. To enable committees to ready issues for a vote in such a short timeframe, the issues would have to be well defined, small enough in scope for Congress to understand and act upon them quickly, and free of all earmarks.

The principles that the Agile Manifesto outlines demonstrate how agile could help government overcome some of its deficiencies.

The principles that the Agile Manifesto outlines demonstrate how agile could help government overcome some of its deficiencies.

Individuals and Interactions over Processes and Tools

Today, the lobbying process functions as a prioritization tool because lobbyists find ways to contribute to the campaigns of the legislators they want to vote for their issues. They also provide information about their issues, making those issues stand out and become higher priorities than whatever other issues Congress might focus on.

Having voters rank issues according to their priority would help legislators to focus on what’s important to their individual constituents rather than on what’s important to the lobbyists funding their campaigns. Adding voters’ reasoning into the mix would help legislators to prioritize user stories and tailor them to their constituents’ needs. Translating the voters’ verbatim reasoning into a usable format would also help staffers to get to know and understand what constituents actually want.

Having a prioritized list of small, concise user stories would force Congress to make decisions quickly, eliminate the distracting add-ons that currently get put into bills, and reduce the lengthy documentation that currently defines legislation. This would result in laws that are closer in length to the Bill of Rights, which would be much easier for citizens to understand, potentially increasing civic engagement.

Yearly or quarterly voting on priorities would be much more collaborative than the current approach….

Currently, our only way to indicate that an issue is a priority is to vote for a candidate who has highlighted that issue as part of his or her campaign platform. However, because campaign platforms comprise many issues, we have no way of knowing exactly what voters wanted to get out of voting for a particular candidate. Yearly or quarterly voting on priorities would be much more collaborative than the current approach, in which voters are stuck with their decisions for a legislator’s full term of office.

After their election, legislators often become so focused on getting re-elected that they don’t act on the issues they promised to address in their campaigns. Instead, they often vote along party lines out of fear of losing funding in the next election, and they work with lobbyists because of the campaign funds they’ve provided. In the future, more transparent state that I’ve described, any legislators who continually failed to pass legislation that was in line with the newly transparent voter priorities, would not get re-elected.

Responding to Change over Following a Plan

Working through the backlog during each the sprint cycle would help keep Congress focused on what our society needs and what citizens actually care about, in a way that is responsive to the changing political landscape. Having a dynamic backlog would be crucial to fostering a flexible system because, as voters’ priorities changed, the backlog would change to match their current priorities. Keeping legislation small would also help Congress to respond to voters’ needs in a timely manner, then once they see the results of new legislation in action, potentially make modifications to it if something didn’t work as anticipated.

Our government is so broken that we need to redesign it before we can use it as a tool to make an impact in other areas.

While what I’ve described probably isn’t a perfect solution, my intent is to start a conversation. Lately, I’ve been trying to find ways to use my design skills to have a greater impact on society. But I’ve come to the conclusion that, until we can do something on a large scale, we won’t have much impact. To make an impact on a large scale, we need to get government involved. Unfortunately, our government is so broken that we need to redesign it before we can use it as a tool to make an impact in other areas. 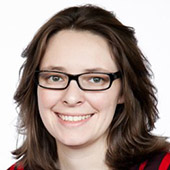 Shannon McHarg is a freelance UX designer who is always looking for ways her design skills can have a positive impact on the world. She thrives on solving complex problems and has done so in domains such as tax preparation, ecommerce, eLearning, and healthcare. Shannon has more than 12 years of experience as a UX designer and holds a Master’s degree in Human Factors from Bentley University. She has experience working within large corporations, including H&R Block, L.L.Bean, and Cengage Learning; with small startups; and for Useagility, a user experience agency.  Read More

Other Articles by Shannon McHarg

Other Articles on Experience Design