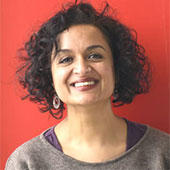 Naintara has over 18 years of experience as a user researcher and has spent the last five years working to make UK government services more user centered. In 2012, she set up the first program of iterative user research within an agile delivery cycle at the Government Digital Service (GDS). Later, she was the User Research Lead for GOV.UK, the government’s largest digital transformation project, then went on to lead the user-research community across GDS. Previously, Naintara had led the Usability Team at Orange and was a consultant at Flow Interactive, working with clients such as Royal Mail, BBC, Department for Education & Skills, Nokia, and Vodafone. She has a bachelor’s degree in Psychology and a Master’s in Research, specializing in Human-Computer Interaction, both from the University of Manchester.

A column by Caroline Jarrett and Naintara Land

Doing Research with People Who Are Not Users: Consultation