Redesigning Ourselves: How We Made Our Agency More User Friendly

By Ollie Campbell
No Comments

We have a group of users. We want to understand what’s important to them. … So we decided to use some of our research and design techniques on ourselves.

Before we started Navy,

we spent years working at big agencies. And after every client pitch or new business meeting, we had the same discussion in the taxi. Did they like us? Did they get it? Are we the kind of company they want to work with? Wouldn’t it be great if we could read their minds?

Suddenly, it hit us. We have a group of users. We want to understand what’s important to them. We want to make their lives a bit easier. We know this stuff! This is just a design problem! So we decided to use some of our research and design techniques on ourselves.

Good Design Starts with the User

We needed to talk to our audience, so we ran a series of qualitative research interviews with senior people from some of the biggest companies in Australia, including Lonely Planet, Telstra, CarSales.com.au, ANZ, and iSelect. During these interviews, we showed people early versions of our visual identity, our messaging, and our presentations. We tested some industry terminology to see what words people understood. We ran exercises to learn about what qualities of a digital agency are important to people. And we talked about the process of working with an agency from the client’s point of view.

Some Things We Learned

These were our key takeaways from the research:

Rather than making big claims, a better approach is to quietly state your achievements and let people draw their own conclusions. Humility is important.

Agencies often lapse into a pretty bold, confident tone of voice when they talk about themselves. We tested communications that proudly declared: “We’re experts.” “We’re the best.” People like strong messaging, right?

This was actually a big turn off for people. They disliked even hearing the word expert. This was a great lesson to learn. When you’ve spent years working on your skills in a certain area, it’s natural to want to tell people how good you are. But rather than making big claims, a better approach is to quietly state your achievements and let people draw their own conclusions. Humility is important.

Avoid jargon as much as possible, even those things which seem obvious.

It’s probably pretty obvious that clients don’t understand terms like contextual inquiry or behavioral mapping. But everyone knows what information architecture is, right? That’s not what we found. In fact, of the industry terms that we tested, this was one that almost everyone struggled to define.

We’ve learned to avoid jargon as much as possible, even those things which seem obvious. In fact, this was part of our decision to call ourselves a digital design consultancy instead of a UX consultancy.

Of course, if we’re talking to an agile or UX aficionado, they need to hear details about how we work. We’ve learned to vary our message according to the audience.

We found some evidence that customer experience and its connection to return on investment is widely understood—even at a very senior level.

The same is not necessarily true for the term user experience, which is a more specialized term.

People … objected to the amount of time and money their agencies invested in entering their work for and winning awards.

When we ran card-sorting

exercises to find out what was important to people, awards was always the first to get the chop. A common sentiment was: “I know how awards work. It’s just people patting their mates on the back.” People also objected to the amount of time and money their agencies invested in entering their work for and winning awards.

We removed all of the references to awards from our communications, and it’s safe to say that we won’t be entering our work for any awards in the future.

Another point of view…

It’s a pretty fundamental psychological principle that people often aren’t aware of their own cognitive processes.

There may be some implicit benefit in how people perceive an agency when they talk about awards.

Tell People Who You Really Are

It can … be tempting to hide who you really are behind a facade of professionalism.

Sometimes it’s easy to focus on the hard facts about your team—like your experience and skills. It can also be tempting to hide who you really are behind a facade of professionalism.

As an experiment, we added some personal information to our company communications and tested the response. “Ollie’s a chess nerd.” “Michael’s a proud new dad.” People loved this. It was amazing how revealing some small details about who we really are helped build a relationship.

But there was a lot of cynicism about some other things. Almost everyone mentioned their being introduced to an agency’s senior team during the first few meetings, only to never see them again. This is not really an issue for our business, because we’re a small consultancy. But, for larger agencies, the lesson is clear: don’t put people in front of a client, then take them away later.

What’s Important When Choosing an Agency?

Based on the card-sorting exercises we ran with our users, shown in Figure 1, there were some pretty clear trends, in terms of the things they value when choosing who to work with, as shown in Table 1.

Most agencies put a lot of emphasis on the things their potential clients describe as least important—awards, size, portfolio.

It’s really interesting when you compare the things clients do and don’t value against the content on a typical agency Web site. Ironically, most agencies put a lot of emphasis on the things their potential clients describe as least important—awards, size, portfolio. The most likely explanation for this is that agencies want to talk about the things that they’re most proud of—which is totally understandable.

In contrast, agencies typically don’t put much emphasis on values. It can be hard to find out what an agency believes in. And agencies often deliberately hide away the people on their team—so recruiters can’t steal them. We’ve tried to be a bit more open about these things on our Web site.

Who cares about your design process?

We found that people’s interest in our process increased in direct proportion to their experience level. It seems like more experienced people have a better understanding of the link between good process and good results.

Our Brand: Before and After Our Research

The research helped us create a visual identity that was more closely aligned to our brand positioning.

Originally, we had used very colorful, three-dimensional shapes, as shown in Figure 2. However, feedback from our research led us to use elements that were simpler, more serious, and a bit more sophisticated. The research helped us create a visual identity that was more closely aligned to our brand positioning, as you can see in Figure 3.

There’s a lot of evidence that agencies don’t communicate with their clients as well as they think they do.

It’s easy to look at the things we learned and dismiss them as common sense. But there’s a lot of evidence that agencies don’t communicate with their clients as well as they think they do. Do you have your awards proudly displayed on your home page? Do you call yourself an industry leader? You might not be giving people the impression you had hoped.

We really enjoyed learning more about what’s important to our clients. We think it’s made us a better company to work with. What do you think? Do you hire digital agencies? Do you work at one? Did we get it right? What’s important to you? 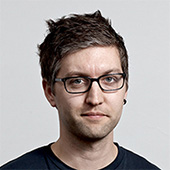 Ollie has led UX design projects for some of the biggest companies in Australia and around the world. He has a degree in computer science and is currently pursuing postgraduate study in psychology.  Read More

Other Articles on Business of UX