Tablet Versus PC: A Creative Decision

By Ryan Bell
No Comments

Are tablets such as the iPad … good tools for content creation, or are they generally limited to content consumption?

Since Apple introduced the iPad in early 2010, an Internet debate has been simmering that goes something like this: One side

scoffs at the iPad and tablets in general as high-end toys that push users to spend their time doing little more than passively surfing the Web, checking Facebook or email, and watching YouTube videos. The other side

claims that such devices are just as good as traditional personal computers (PCs)—even better for creative tasks—and that there is nothing to prevent them from writing the next great novel—or its equivalent in any given field—on their iPad.

Who is right? Are tablets such as the iPad—with the particular vision of tablet computing it has popularized so quickly—good tools for content creation, or are they generally limited to content consumption?

At this point, no one can really argue that content creation on the iPad is not possible. The Apple App Store currently boasts over 3,500 titles for the iPad in the productivity category, including versions of the Apple applications Pages, Numbers, and Keynote. However, the mere existence of such apps does not prove that the iPad is the equal of the PC when it comes to enabling creative activity.

We may be overlooking something important: the possibility that these very different devices may simply be good at different kinds of creativity….

Actually, by fighting over whether tablets or PCs are better tools for creating content—as a sort of proxy war over whose vision owns the future of computing devices—we may be overlooking something important: the possibility that these very different devices may simply be good at different kinds of creativity and that their differences may actually complement one other.

Media theorist Marshall McLuhan is famous for his formulation

that “the medium is the message.” What if, instead of expecting tablets to carry the same message as PCs—that is, to offer applications with the same types of capabilities done in the same way, such as word processing, number crunching with spreadsheets, and CAD and video production—then perhaps finding them wanting, we tried listening to the message inherent in this new tablet medium? What would we find?

Both form factors have creation or production in their DNA, but with very different emphases, contexts, and approaches.

The logical place to start is the form factor of each kind of device, as well as its method of interaction, as follows:

These physical qualities are so elementary that we rarely think about them in regard to either kind of device. But their subtle, almost subconscious references to similar objects and the things we associate with them are key. Think about typewriters’ historical context: office environments, production machines, newsrooms, formal and professional settings, or perhaps a professional novelist banging out an opus.

Tablets, in contrast, have a much more primal form factor. Ancient clay tablets—like the Cuneiform tablet

shown in Figure 1—held some of the earliest known writings. In contrast to typewriters, these are handheld devices, and people manipulate their content directly rather than through some other mechanism. We often use one modern incarnation of the tablet, the paper notebook or journal, to hold our most intimate, raw thoughts. The same professional novelist who I mentioned previously may have sketched the plot and characters of a novel in a notebook by hand before starting to write the manuscript on a typewriter.

In other words, both form factors have creation or production in their DNA, but with very different emphases, contexts, and approaches. The big difference between them is this: the typewriter form factor has its roots in creation that is formal, mechanistic, and professional, while people have historically used tablets to create content of a more personal or intimate nature.

This is not to suggest either that iPads are always better for content of a personal nature or that PCs are always better for professional content. Either would be an overly simplistic interpretation of what these differences mean, and I am sure one could readily find plenty of obvious counterexamples to refute either view. Rather, we need to look at the creative process itself to map these distinctions to creative activity.

The Nature of Creativity

There is a generative phase, during which people create or find and capture ideas. We could consider this phase to be divergent or analytical

Creativity is not a single, monolithic thing. Not only are there many different types of creativity and creative people; one act of creation by a single person often involves multiple phases and tools. There are at least two such phases.

First, there is a generative phase, during which people create or find and capture ideas. We could consider this phase to be divergent or analytical—in the root-word sense of loosening or opening things up. Its associated activities include drafting, sketching, and brainstorming. This phase seems to have a natural fit with the historical associations of the tablet: raw, direct, intimate. The blank canvas of an iPad app like Paper, shown in Figure 2, offers an unstructured space, has minimal distractions, and feels ideally suited to this kind of activity. The iPad lets us satisfy our appetite for external information via the Internet and camera and hides organizational details like files.

A compositional phase lets us organize, refine, filter, and weave together the ideas from the first phase into a finished work. This phase tends to be convergent and synthetic….

Second, a compositional phase lets us organize, refine, filter, and weave together the ideas from the first phase into a finished work. This phase tends to be convergent and synthetic—in the sense of putting things together—and involves activities like combination, comparison, and iterative refinement. The PC, with its overlapping or side-by-side windows, spatial file organization metaphor, and precise keyboard and mouse input is a very strong tool for this type of activity. People have produced and polished their professional work using PC productivity applications—from Microsoft Office to AutoCAD to Photoshop—for decades. The established track record of PC applications demonstrates this strength.

“Both tablets and traditional PCs have strengths in content creation, but they are strengths of different types. And their different strengths have more to do with the creative process than the content itself.

Both tablets and traditional PCs have strengths in content creation, but they are strengths of different types. And their different strengths have more to do with the creative process than the content itself. This assessment of the nature of these differences that I’ve outlined here is an intuition that needs further validation through research. If true, it suggests a vision for creative computing:

has described using these two different tools in this way.

Whether you are a developer, a designer, or anyone else who creates something using technology, consider this challenge: instead of thinking of the tablet as an ultraportable, flatter caricature of the PC—or dismissing it as such—consider how you might use the tablet to unlock new kinds of creative computing and dream up a new and different way of working. 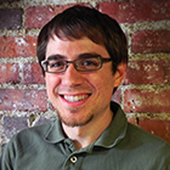 At EffectiveUI, Ryan leads development teams in creating custom applications that improve digital interactions and enhance engagement with a company and its brand. His teams build user experiences that delight both clients and their customers. He has more than eight years of experience in IT delivery and support. In addition to software development, Ryan has worked in information architecture, data visualization, and usability research. Ryan completed his B.A. at the University of Denver, with a double major in Digital Media Studies and Spanish.  Read More