It is essential that an organization’s UX strategy be at the core of user-centered design. A UX strategy establishes goals for a cohesive user experience across all channels and touchpoints.

Today, organizations interact with their customers through multiple digital channels such as call centers, mobile devices, applications, and Web sites. It is not enough to create a strategy for these channels from business, technology, and marketing perspectives. Rather, it is essential that an organization’s UX strategy be at the core of user-centered design. A UX strategy establishes goals for a cohesive user experience across all channels and touchpoints. The success of a UX strategy across multiple channels and offerings depends especially on the following factors:

Organizations must translate this information into a cross-channel user experience that meets the needs and aspirations of both its business and its customers.

The vision that a company’s leadership team sets should be the starting place for UX strategy and, thus, the user-centered design (UCD) process.

The vision that a company’s leadership team sets should be the starting place for UX strategy and, thus, the user-centered design (UCD) process. That vision determines the company’s focus and distinguishes the company from its competition. Establishing a UX strategy ensures a unified cross-channel user experience that matches the company’s vision.

Aligning the UX strategy with the leadership’s vision presents challenges when a UX team relies solely on the text of an organization’s business plan. A more effective approach is to engage the company’s leadership in interacting with the UX team directly. It is important to hear what each of the C-level leaders has to say and to be able to ask them questions to judge where consensus exists among the leadership team—and where it is lacking. This is especially helpful in identifying their points of divergence. Taking this approach provides a good reality check to see whether all of the key stakeholders are on the same page. It is far better for misalignments to surface up front rather than for customers to encounter them accidentally down the line.

Another benefit of engaging the leadership early on is that the UX team can take responsibility for communicating how the leadership vision impacts the total customer experience. On the other hand, if a project proceeds without leadership input and buy-in, the chances of its success greatly diminish, and sustained UCD integration and process governance and long-term repeated success become unlikely.

In contrast, when a UX team engages in a dialogue with executives from the start, it brings the total customer experience to the forefront of their minds. Thus, it becomes possible to implement a systematic, comprehensive, and industrial-strength UCD process across an organization.

Strategy has its maximum impact at the beginning of a UCD process. A crucial component of UX strategy is understanding the multichannel experience and synthesizing all of the key customer touchpoints into one cohesive whole.

UCD has traditionally focused on the tactical aspects of designing a user interface. Clearly, tactical execution is essential if a user experience is to be efficient and satisfying to users, but tactical execution is not enough. A quick scan of current UX job posts makes it clear that companies are now seeking UX strategists—not just UX tacticians. Skipping UX strategy or implementing it late in the design process reduces the chances of project success and can even lead to a fiasco.

When an organization leaps straight into design without defining their UX strategy first—and thus fails to incorporate leadership’s vision—they may discover that, even though their design proves to be usable during usability testing, customers have no need for the product or service. In such a case, the project must go back to the drawing board, losing valuable time. No organization can afford to design a usable interface for a service that customers passionately reject.

Accordingly, the strategic and tactical pieces of a UX project must play together well. Strategy has its maximum impact at the beginning of a UCD process. A crucial component of UX strategy is understanding the multichannel experience and synthesizing all of the key customer touchpoints into one cohesive whole. Otherwise, from a user perspective, the experiences of the various channels may be at cross-purposes with each other. For example, the user experiences of mobile devices, notebook computers, a call center, and a kiosk may appear disconnected—especially when they are developed in siloed parts of an organization, which is common. Although the experiences of the different channels do not have to be identical, they do have to be synergistic.

With a UX strategy in place, it’s much easier to blend all of these channels seamlessly in a high-quality, total experience and enable users to switch between them without missing a beat. However, achieving this must be a planned part of a UX strategy because it will not magically work itself out at the end of a project.

“The essence of strategy is choosing what not to do.”—Michael Porter

Ecosystem research takes a broad, ethnographically inspired view and enables UX teams to understand the interconnections, intersections, commonalities, and overlaps, as well as the divergences in a user’s world.

A significant part of UX strategy is obtaining a comprehensive view of actual users. Unlike traditional user research for the analysis of tasks, which captures a detailed view of specific user behaviors, ecosystem research takes a broad, ethnographically inspired view and enables UX teams to understand the interconnections, intersections, commonalities, and overlaps, as well as the divergences in a user’s world. Most significantly, it examines how various types of users, scenarios, environments, and artifacts fit into the big picture. Understanding a customer ecosystem requires understanding not only the main user, but the key secondary actors as well.

For example, when designing a portable computer for students in India, Human Factors International (HFI) collected data from and observed students, but also interviewed teachers, parents, siblings, and classmates. We gathered usage information in the classroom, at home, and en route to and from school. This provided a richer and all-encompassing understanding of how students would use the computer both in and out of the classroom, in unexpectedly different ways from students in the U.S. Because of this information, we were able to create a more comprehensive picture of the primary user, the student. We would not have been able to discover any of these nuances if our only research tool had been a traditional task-analytic interview.

An indispensable aspect of ecosystem research is learning what motivates users on an emotional level, where powerful tools of psychological influence come to bear. In another example, a bank discovered that its customers wanted help with financial planning, so they added a number-crunching tool to their Web site. To their utter dismay, hardly anyone used it. Upon probing deeper into customer emotions, HFI discovered that they didn’t really want help crunching numbers. Rather, they wanted help with impulse control. Understanding emotional motivations means going below the surface to uncover underlying drives, blocks, beliefs, and feelings.

User research in general—and ecosystem research in particular—helps you to understand users and eliminates two of the biggest threats to designing a successful user experience that meets users’ needs:

Being prepared with user-research data that describes the actual behaviors and priorities of users minimizes guesswork, substantiates your design decisions, helps you to avoid squabbles based on personal preferences, and prevents the views of those team members who have the loudest voice or the highest rank from having undue impact. While executives know the business, doing user interface design by decree is usually disastrous.

Rather than designing for every possibility—no matter how unlikely—a UX team can ground their design choices on data and use their research findings both to prioritize what elements to include and to determine which to leave out. While it’s sometimes more tempting for a team to add features rather than take them out, reducing the clutter in a user interface and leaving in only the essentials is the way to go.

With and Without UX Strategy

“UX strategy is too important to be based just on stakeholder envisioning.”—Dr. Eric Schaffer, CEO Human Factors International

So what is the big deal about UX strategy? Let’s consider what happens without it. Here’s an example: One company—well recognized in their vertical space, with a strong brick-and-mortar presence and an enthusiastic customer base—wanted to fix its ecommerce Web site by improving its usability. The goal was to “make shopping and buying easier.” On the face of it, that would have been easy to do. But it also would have meant pitting the company squarely against big competitors like Amazon and Walmart. In a highly commoditized world where sales depend on deep discounts or free shipping, it’s critical to differentiate customer experience beyond mere ease of use and efficiency. So that company’s initial goal was essentially wrong—it would have made them an also-ran in their own sweet spot. Instead, they needed a UX strategy that harnessed the strong value of their brand; leveraged the fanaticism, devotion, and loyalty of their customers; and incorporated those distinguishing elements into the customer experience.

The bottom line: while executive vision is a crucial part of UX strategy, it is not sufficient in and of itself. To sum up, consider UX strategy the missing link that bridges channel differences, addresses customers’ underlying motivations, incorporates the full customer ecosystem, and ultimately, connects the executive vision to the final UX design.

Good for class, too. 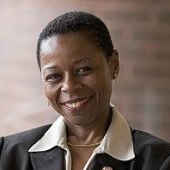 April has the expertise that comes from more than 30 years of professional experience in the field of user experience and has spent the last 10 years with Human Factors International. As Vice President of UX Strategy at HFI, she is passionate about helping clients to mature their UX practices and embed user-centricity into their organizations.  Read More