Even well-funded sites and apps can fail to gain adoption without a good, user-focused design.

There’s no question that users will abandon any Web site or mobile app they don’t enjoy using. User experience is a key determinant of success or failure. Yet 73 percent of industry executives see user experience as one of the toughest challenges they face. Even well-funded sites and apps can fail to gain adoption without a good, user-focused design.

Some aspects of creating a quality user experience are obvious. For example, if users can’t figure out how to use your site, chances are high they’ll abandon your offering and look elsewhere. Likewise, the best product teams employ fleshed-out user personas to help them address each user’s specific needs.

But if you stopped there, you would be leaving out one of the most important—and hardest to define—components of a compelling user experience: user satisfaction.

The Importance of User Satisfaction

People want the feeling of satisfaction—the euphoria—that accompanies the sense of completion they experience when something meets or exceeds their expectations in a beautiful way.

Earlier this year, Digg released a video that went viral and racked up more than 16 million views. The video comprised five minutes of footage showing highly satisfying actions such as a sharp knife slicing through a tomato; a robot lining up stacks of batteries, then picking them up; or a printer miraculously transferring a camouflage pattern onto a helmet.

What’s so satisfying about all of these actions? It’s a little difficult to pin down precisely, but the common element is probably a clear, visually pleasing, immediate indication of a perfect outcome.

People want the feeling of satisfaction—the euphoria—that accompanies the sense of completion they experience when something meets or exceeds their expectations in a beautiful way. They feel delighted when a chocolate bar breaks exactly in half or a pen glides smoothly on the first try. Satisfaction has gained social currency because marketers and content providers have realized the power of satisfying content. Folks feel good after seeing something satisfying, and they are happy to share it with the world.

By keeping user satisfaction foremost in their mind, UX designers could transform products and reap massive benefits. Products that go beyond merely being visually attractive or informative to becoming genuinely pleasing to use deliver a quality user experience.

Many app designers have been aware of the opportunity that user experience presents for years now. When someone swipes to delete an item in iOS and that item instantly disappears, he feels satisfied. For example, Tinder’s Swipe Left/Swipe Right concept has changed the landscape of dating applications. These simple actions provide clear and immediate feedback, leading to a perfect outcome. With one swipe, a rejected item or romantic candidate is gone forever.

Here’s another example from Twitter: When a user favorites a tweet by clicking a small, pink Valentine’s heart, it jumps briefly, then explodes into colorful confetti. This immediate feedback lets the user know that he successfully completed the action, and Twitter delivers it in a cute, visually pleasing manner.

Progress bars can also deliver that jolt of satisfaction when an action finally completes. This works even better when you add a little visual treat to celebrate the user’s success. However, despite our knowing for decades about “The Importance of Percent-Done Progress Indicators for Computer-Human Interfaces,” all too often we fail to prioritize this kind of satisfying feedback. It should be a priority.

Can’t Get No Satisfaction?

When you relegate user satisfaction to nice-to-have status, it often gets left out of a release.

What happens when a design solution seems to go out of its way to thwart user satisfaction? It takes users only about 50 milliseconds to form a poor opinion of a user interface design. This can quickly turn what could potentially be an engaging user experience into one that users find frustrating.

How can you identify such problems on your projects? Put yourself in the user’s shoes, think about how you could get things wrong, and strive to deliver satisfaction instead.

Can you remember a time when you moved your mouse over a link on a Web site or tapped a button in an app, and it didn’t provide any feedback—for example, by changing color? While this was just a brief, unwanted “Hmm…” moment, it likely took you out of the flow of what you were doing.

Truly satisfying user interfaces acknowledge a user’s input—which, for important actions, provides a sense of accomplishment. Brief, aesthetically enjoyable, feedback mechanisms keep users feeling that all is well, and they’re fruitfully engaging with a well-oiled machine. Without effective feedback, users may feel lost or even that a user interface is their adversary.

As satisfying, Zen moments begin to stack up while someone uses an app, that user’s affinity for a product grows.

However, a common problem occurs when project teams save such implementation details for a polishing phase—work they plan to do after they’ve finished a product’s core functionality—if there’s still enough time and budget to complete the work. But when you relegate user satisfaction to nice-to-have status, it often gets left out of a release.

User satisfaction is a delicate state and hard to sustain over long, tedious work sessions. Feedback works best when it applies to small, manageable chunks of a user interface. So don’t wait to reward users until they’ve completed a lengthy, drawn-out set of interactions.

While user satisfaction is clearly a goal worth striving for, how can you incorporate this somewhat intangible concept into your designs? Here are some satisfying first steps:

So many of the companies that are vying for market share are missing out by failing to consider user satisfaction when designing and implementing their products.

Competition for eyeballs and clicks couldn’t be fiercer, yet so many of the companies that are vying for market share are missing out by failing to consider user satisfaction when designing and implementing their products.

Good read. While I agree to your point of immediate response, I would still prefer using standard symbols wherever possible. Though they’re boring, the human mind registers those symbols faster. For instance, a triangle with exclamation mark inside represents danger, and no other symbol can replace that. In the long run, a user would prefer those. However, it’s a personal view only. 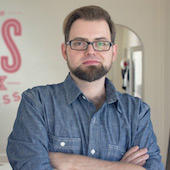 After getting his start in information architecture, Q progressed to UX design. Having a particular zeal for finding simple solutions to complex problems, he was Lead Designer at WhisperWire, Inc., where he helped refine the creation of telecommunications networks and brought them into the 21st century. Q has led teams of up to 24 UX designers, training up some of the best minds in the industry—including designers who have gone on to work for Disney Interactive, Chaotic Moon, and Accenture. At Rocksauce Studios, Q focuses on identifying the core mission statement for every product and encourages his team to keep the user’s primary goals in mind.  Read More

Other Articles on Principles