By Ward Andrews
No Comments

Most organizations are perpetually seeking ways to innovate more quickly, while at the same time, mitigating the risk that is inherent in taking chances on new products and design solutions.

Because of the time, energy, and money that product-development projects require, product design and UX design carry tremendous levels of risk. Most organizations are perpetually seeking ways to innovate more quickly, while at the same time, mitigating the risk that is inherent in taking chances on new products and design solutions. The need to balance the speed and the risks of product innovation is not new. What is new is how many organizations of all sizes are embracing design thinking and prototyping to reduce the risk of product design.

By adopting a design-thinking approach—and fostering a culture that embraces prototyping and rapid iteration—you can improve time to market while reducing the capital and human costs of product development.

The biggest risk to innovation is focusing energy and attention on execution, without creating the necessary infrastructure to test for market fit or ensure that a new product accomplishes the intended business outcomes.

Organizations pressure product teams to produce tools, software, and products at a rapid pace. They measure teams by how quickly they can bring product iterations to market or how well how they execute on new-product projects. In actuality, the biggest risk to innovation is focusing energy and attention on execution, without creating the necessary infrastructure to test for market fit or ensure that a new product accomplishes the intended business outcomes.

Sometimes, organizations target and measure for usability, ease of use, or thoroughness in the style, interactions, and overall user experience of a new-product concept, without validating that the new concept is the correct one for the target market. A product concept could test well for usability, brand experience, and functionality, but fail to serve a market desire or need. Even though a company might execute an idea well, they might fail to validate the need for a new product or innovation.

What Can You Do to Avoid This Risk?

Let’s consider three things that you can do to avoid this innovation risk.

1. Ensure that business outcomes drive your prototyping hypotheses, just as much as usability and user experience.

While good UX designers know how to identify usability and experience gaps within their prototypes, they aren’t always adept at recognizing what market forces and business outcomes a new product should address. A great product solves problems for its users, but it should also provide a tangible return on investment for the business. When you’re defining your prototyping process, be sure to take the ultimate business outcomes for a product into account when validating your design.

2. Use the other tools in your design-thinking toolbox.

While prototyping is becoming easier and its popularity is increasing, knowing when to use what method of prototyping is just as important as knowing how to create a specific prototype.

The best product leaders and designers are innovators who can draw from many different methods in their toolbox. The real art and skill is in knowing when to use which tool. Some approaches might take longer, but reduce risk more effectively; while other approaches might be quicker and, in certain business contexts, could be equally effective in reducing risk. While prototyping is becoming easier and its popularity is increasing, knowing when to use what method of prototyping is just as important as knowing how to create a specific prototype.

Let’s look at the case of P&G’s Swiffer. In developing the Swiffer, P&G skipped many of the design-thinking phases and jumped right into developing new soaps that would improve their customer’s floor-cleaning experience. They assumed that people wanted new soaps, without stepping through a proper design-thinking process. However, after several failures, they brought in a design-thinking firm that, through direct interaction with customers, recognized that consumers didn’t actually want a new soap—they wanted a new mop. P&G began testing different versions of disposable mops, eventually settling on the design of the Swiffer. By taking a design-thinking approach, backing it up with user research, and eventually doing prototyping, they created a new billion-dollar market where one didn’t exist before.

Being aware of your organization’s level of UX maturity could offer clues regarding what steps adopting a prototyping culture might require.

The level of UX maturity that an organization has attained through its testing infrastructure affects the amount of risk that product innovation entails. Being aware of your organization’s level of UX maturity could offer clues regarding what steps adopting a prototyping culture might require. Most mature companies are building out prototyping and testing infrastructure—including design systems and testing and reporting tools—all to reduce the risk that is inherent in the process of innovation. Of course, the real risk in improving your product-development process is not getting started.

Facebook’s famous motto “Go Fast and Break Things” has its roots in their prototype-and-test methodology. Recently, Mark Zuckerberg explained that, in its early days, Facebook’s speed increased the level of risk to their systems because they didn’t have the proper infrastructure in place for execution. Zuckerberg recognized early on that their ability to innovate would be a function of their ability to test new user experiences and features in a stable environment. He said, “We thought, Okay, we need a new strategy to enable us to move fast.’ And what we came up with was: we’re going to do this by building the best infrastructure.”

Going fast at Facebook is now the outcome of taking a calculated approach to building a stable testing infrastructure and helping engineers to accelerate their prototyping process. As Facebook’s platform grew, breaking things became much riskier and more costly for the company. So, for two years, Facebook slowed down on building new features so they could put the proper infrastructure in place. Now, they are a more mature organization, and their testing process is less risky.

Today, there are typically more than 10,000 different live versions of Facebook at any given moment. Their engineers are prototyping and testing all of them. For each version, they test the user experience, users’ level of engagement, and more, so Facebook can ship the best-performing user experience almost instantly.

More and more innovation leaders are recognizing that they need additional UX design and prototyping assistance. However, they might not have sufficient time to evolve their entire organization’s culture to achieve the necessary change a design-thinking approach requires. A cost-effective way of jump-starting your organization’s design-thinking DNA could be hiring an outside UX prototyping expert—just as P&G did for Swiffer. The greatest risk in product innovation is failing to ensure that your product meets real users’ needs. 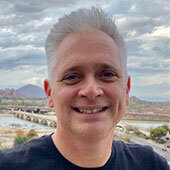 At Drawbackwards, a human-experience consultancy, Ward creates meaningful software products and brand experiences. He is also part of the Honors Faculty at Arizona State University, where he teaches Design Entrepreneurship. For over twenty years, Ward has worked with hundreds of the world’s best brands, including American Express, Choice Hotels, Blue Cross Blue Shield, Sony, Intel, General Dynamics, Insomniac Games, GoDaddy, and Willis Towers Watson. His brand and design projects have garnered Addy, Prisma, and Emmy awards. His customer-experience and software-product work has generated over $1 billion in value through cost savings and new revenue growth.  Read More