UX Leaders’ Getting a Seat at the Top Table

By Rima Campbell and Kuldeep Kelkar
No Comments

Design-forward organizations performed at twice the rate of their industry competitors when it came to generating revenue.

In October 2018, McKinsey analyzed the business impact of the design efforts of 300 publicly listed companies over a period of five years, across various industries and countries. Their report found that design-forward organizations performed at twice the rate of their industry competitors when it came to generating revenue.

So what do successful design-led organizations do? What’s their secret recipe? UX leaders continually test and iterate. We embed research throughout our product-development processes and make data-driven decisions. We also measure UX design performance and its impact on the financial success of the business. Furthermore, we live in a world of constant competition, in which every executive wants to know how their company ranks among its competitors. Seeing these rankings can be a motivational booster.

For example, imagine working in product design at a US life-insurance company and finding yourself in the elevator with its CMO (Chief Marketing Officer). You’d have ten seconds to make an impression. What if you were to reel off the measurable impacts of the revenue-critical journeys of your biggest competitors’ Web sites? Your CMO might react by asking, How so?

In April 2022, UserZoom launched a competitive digital-experience benchmarking study, ranking the UX journeys of the Web sites of five US life insurers. We based our mixed-methods study on responses from 500 prospective life-insurance customers of Mutual of Omaha, Farmers Insurance, State Farm, Northwestern Mutual, and Prudential.

Our study examined the prospect’s revenue-critical journey through these insurance providers’ Web sites, as well as ratings regarding usability, trust, appearance, and loyalty. We ranked each insurer using UserZoom’s proprietary QXscore benchmarking system, which combines observed-behavior task success alongside attitudinal measures such as usability, or ease of use; trust, appearance; and loyalty, or Net Promoter Score (NPS), resulting in an easy-to-understand grade between 1–100. As Figure 1 shows, Mutual of Omaha’s Web site received the highest QXscore for revenue-critical user journeys, 84 out of 100; while Northwestern Mutual’s Web site received the lowest QXscore of 73/100. Figure 2 shows some competitor scorecards.

Now, if you were sitting with insurance executives at the top table in the CMO’s office and could explain why Northwestern Mutual’s Web site scored the lowest, the CMO might ponder how you could tie this QXscore—which includes NPS—to financial metrics. The CMO might also consider how to connect the QXscore to the company’s key business metrics to justify incremental investments in UX design and research.

Measuring the Performance of UX Leaders

If you have a deep understanding of your key executives’ ambitions and desires, you can tie UX metrics to them.

McKinsey also reported that only a third of CEOs and their direct reports could confidently state the accountability of their head of design. This data could provide an untapped opportunity for design leaders.

We recommend that, when measuring a digital user experience, you start at the heart of an organization. Answer these questions:

If you have a deep understanding of your key executives’ ambitions and desires, you can tie UX metrics to them.

Here are some examples of companies who have measured the performance of their user experience, connected their performance with business outcomes, and gotten a seat at the top table:

Identify what matters most to your executives.

To get the most out of User Experience and make it work for your organization, we recommend this UX measurement checklist, which we’ve organized into three easy to follow steps:

Of course, using QXscores to get a seat at the top table is easier said than done. So we recommend that you start small, by using Step 1 to establish trust. Testing, learning, and iterating on designs tend to be core elements of UX research and design. But taking just the first steps is not enough to get a seat at the top table. Conducting up-front discovery research to influence product roadmaps and measuring performance are critical to getting that elusive seat. This makes sound business sense, too.

Rima has more than 20 years of experience in UX design, strategy, and research. Prior to joining UserZoom, she was Head of the Global UX Research Center of Excellence at Citigroup. Rima spent nearly two decades at Citigroup, where she established several UX practices and built their Information Architecture and UX Research teams from the ground up. She implemented a UX measurement program and proved the value of UX insights and their impact on the business’s button line. As a result, their UX research budget grew from $30K to $3 million in five years. Rima is a storyteller and enjoys speaking at UX conferences and mentoring and empowering UX professionals to thrive and achieve tangible results.  Read More 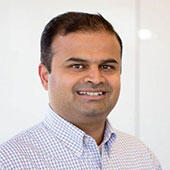 Kuldeep has more than 20 years of experience in UX research and design, working for small and large enterprise organizations. He had built world-class UX teams, demonstrating business value through UX design and research. Before joining UserZoom, he was at TATA Consultancy Services (TCS), where he was Head of User Experience. Prior to that, he led UX Design and User Research at PayPal for nearly a decade. He has also led UX efforts at KLA-Tencor and Icon Medialab. Kuldeep is a renowned author and speaker. He has a BE in Industrial Engineering from Nagpur University and a Master’s Degree in Human Computer Interaction from the Industrial Engineering department at Clemson University.  Read More

Other Articles by Kuldeep Kelkar

Other Articles on UX Leadership