Let’s Get Inclusive: Designing Products for Everyone

By Kelly Byrom
No Comments

Could we shape our product-design thinking around designing for everyone?

Several years ago, I worked on a team that was designing a digital experience to help people find spaces and resources on a college campus. During design reviews, the design team presented two ability-based concepts: one for standing users and one with a button that let a user in a wheelchair reposition the screen.

The concepts reflected the client’s requirements and followed the design norms of the time. However, as I watched the team present these two distinct solutions, something felt off. We had designed segmented experiences as if wheelchair users were an exception, and we were requiring them to take extra steps. I wondered: Could we have accommodated different accessibility needs without creating different designs? In other words, could we shape our product-design thinking around designing for everyone?

Designing for everyone is about considering the full, beautiful spectrum of human nature and possibility so design helps rather than hinders the user’s quality of life.

The first step was clarifying how we should define everyone. It’s not an of average of different sizes, abilities, cultures, and genders. It’s not about identifying the lowest common denominator or focusing only on how users are the same. Instead, designing for everyone is about considering the full, beautiful spectrum of human nature and possibility so design helps rather than hinders the user’s quality of life. When we design for everyone, we further diversity, equity, and inclusion.

Designing for Everyone: 4 Principles

It is possible for product design to move beyond the mythical average and serve everyone. Let’s consider four principles that make that possible.

1. Successful design meets users where they are.

Successful design starts with listening to target users and observing how the world looks from their perspective.

Many companies are good at identifying market needs. The challenge comes when they immediately jump into designing a solution before fully understanding the motivations of the humans who will use it. In contrast, successful design starts with listening to target users and observing how the world looks from their perspective.

Consider this example: In the early 2000s, a major national bank was struggling to get people to open savings accounts. They knew their customers had an appetite for saving and knew their products could help customers do just that. But that knowledge wasn’t translating into new accounts.

The bank went out to speak with their customers to uncover the disconnect. They learned that, for many customers, talking about their finances was uncomfortable or even stressful. Customers knew that they should be saving, but they didn’t want to have a conversation about that with someone at the bank. They didn’t even want to think about saving, and they avoided doing so at all costs. At the same time, the bank observed that customers were rounding up amounts when balancing their checkbook to make the task easier and faster.

The bank took in this information and came up with a solution that met their customers where they were. They created a program that rounded up customers’ checking purchases to the nearest dollar and automatically deposited the difference into a savings account. This solution leveraged their customers’ existing behaviors and reduced the emotional friction in saving money. Designing their product from the customers’ perspective paid off. The following year, 60% of the bank’s new customers signed up for a savings account.

2. Vet your datasets for broad representation.

As designers, we can ask our product partners to ensure that datasets include women and people of color.

Singular data sets produce biased results. For example, the auto industry modeled crash-test dummies on an average male, according to Consumer Reports. But female bodies are physiologically different, so designing cars using male standards has meant that women are 17% more likely to be killed in a car crash. Female passengers are also 73% more likely to be injured in a frontal collision.

Now that design is increasingly driven by data and algorithms, we are encountering similar problems in software design. One academic study reviewed the automated speech recognition (ASR) systems that major US technology companies have developed and trained using predominantly white, male voices. The study found that the average error rate for black speakers (0.35) was almost twice as high as for white speakers (0.19).

As designers, we can ask our product partners to ensure that datasets include women and people of color. We can conduct ethnographic studies and observations with diverse users before releasing a product experience.

As much as possible, designers should strive to make accessibility a product’s default rather than a configuration option.

Currently, the iPhone accessibility menu has 22 submenu options, covering vision, hearing, physical, motor, and general needs. That’s impressive. However, as much as possible, designers should strive to make accessibility a product’s default rather than a configuration option.

For instance, dyslexia affects 20% of the population. People with dyslexia have a much easier time reading left-aligned text rather than centered text. To assist these users, designers can make left-aligned text the default—with no downside for other readers.

Text size is a great example of how design thinking has made software user experiences more inclusive. Developers used to favor small, compact text because they were used to working with computer code. Yet the National Institutes of Health (NIH) estimates that 11 million Americans aged 12 and older have uncorrected visual impairments. Rather than give these users eyestrain or force them to change text sizes, many software designers now default to larger text, along with more legible fonts and plenty of whitespace. As it turns out, these changes benefit all users by creating an experience that is not only more accessible, but also more comprehensible and visually engaging.

4. Follow design standards, but watch out for points of exclusion.

We should … embrace a willingness to address points of exclusion…. In doing so, we can gradually set new standards and create patterns that other designers can replicate.

Designers understand the importance of using standard patterns, colors, and icons to communicate key information. For example, most users recognize that the hamburger icon in mobile apps and on Web sites indicates the navigation menu. When designers replace that icon with something else—such as a company logo—they might be trying to support the brand, but at the expense of the user experience. In design, we want to create an experience that is personal and personable, but it must also make sense to our users.

Nevertheless, we should sometimes challenge design standards. For example, B2B (business-to-business) software is complex, typically providing a broad spectrum of data and supporting diverse tasks. That complexity often makes B2B software slower to change. As a result, it’s still common to find only two gender options or forms that accommodate only male-female marriages. So it’s important to think of product design as an evolution and embrace a willingness to address points of exclusion as we discover them. In doing so, we can gradually set new standards and create patterns that other designers can replicate.

New design patterns could even nudge institutions to reconcile their biases. How, for example, should the insurance industry assess auto-insurance risk for an 18-year-old, transgender woman who was assigned male at birth? Systemic change could begin with a design choice, whether it’s in a digital user interface or on the sign next to a restroom door.

Companies talk about putting customers first and designing with empathy for the user. But, to fulfill that promise, we need to think holistically about our users. Users are not averages. They are individuals with different physical and cognitive abilities. Different gender identities and cultures. Different voices and appearances. And the design choices we make can have real implications for our users’ opportunities, safety, and sense of belonging. To honor our users, let’s truly design for everyone.

VP of Platform and Experience Design at Vertafore 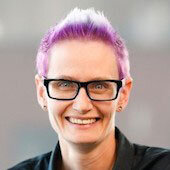 Kelly is passionate about designing for people, not products. During a Vertafore Chief Customer Chat, Kelly discussed scenarios in which design standards have left women 17% more likely to be killed in a car crash or caused application designers to disregard 20% of the population who have dyslexia by using centered or justified text, offering four principles for product designers to consider. Her goal is to move beyond the mythical average human being and truly design for everyone. Kelly earned her Bachelor of Fine Arts from Atlanta College of Art and has worked in digital design since 1997.  Read More

Other Articles on Universal Design